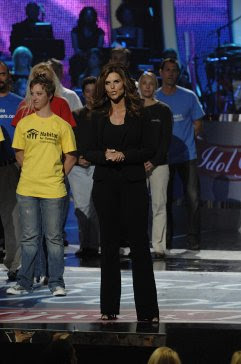 My name is Kate Wright and I am an AmeriCorps member currently serving with Habitat for Humanity of Greater Los Angeles. In the past several months I've met the most amazing people, helped families change their lives and built alongside a former president and great humanitarian, Jimmy Carter.
Most days you'll find me working on a Habitat build site helping our volunteers discover power tools and a new found love for helping others. But this week, wow! I still cannot believe how I ended up on the stage at the Kodak Theater (like, where they hold the Academy Awards) with Maria Shriver!!! That's me in the yellow.

I really had the time of my life at the "Idol gives back" event! We (myself(Kate), Bethy, Jacky, David, Imani, and Alison) arrived at the Kodak Theater in Hollywood around 12:30 on Sunday, wearing our bright yellow HFHGLA shirts. At this point, we hadn't really been told what we were going to be doing, so we didn't know what to expect. After waiting a while in a lobby with a hundred other volunteers from different nonprofits, (and after accidentally eating some cookies that were really meant for the "Idol choir"), we were told that all one hundred of us would be on stage with Maria Shriver while she spoke about the importance of volunteering.

We were then all lined up backstage for the rehearsal so we could practice walking onstage and know where we were supposed to stand for the final taping. Once we were all onstage, Nigel Lythgoe rearranged us so we were spread out all over the stage. Imani, Alison, Jacky and I were all standing together when Nigel yells out "We need two yellow shirts over here please!" Jacky and I hear Alison saying under her breath "GO! GO! GO! GO! GO!" So, we move to where Nigel had wanted the "yellow shirts." As it turns out, where he wanted us was just about center stage, right near where Maria Shriver stands to deliver her speech! The producers ran through what Mrs. Shriver would say, and what we were supposed to do and how we were supposed to exit the stage.

After our rehearsal, the all of the volunteers were invited to watch the rest of the rehearsal, but we were told that we may not be able to stay during the actual taping. Because we had four hours until the actual taping, and because no one wanted to pass up a free concert (we did not know that we would later be invited to stay for the real show), we stayed and watched the different stars rehearse. We saw John Legend perform, Fergie sing "Barracuda" with Heart, Miley Cyrus sing and dance twice, Carrie Underwood sing a George Michael song, Gloria Estefan preform "Get on Your Feet," and the Idol contestants sing the finale of "Shout to the Lord."

When it was time for the final taping, we were all lined up backstage waiting for the show to start. Backstage, the Idol contestants were also waiting for their time to go on. I just about died when Carly Smithson put her hand on my shoulder and asked me to hand her a bottle of water! A few minutes later, Simon Cowell stepped on my foot as he walked on stage, but that was way less fun.

It was amazing to be able to stand onstage with Maria Shriver and one hundred other volunteers while she spoke about the importance of giving back. It was a once in a life time experience to look out at the audience and recognize celebrities in the crowd who were looking up at us, there to support the charities and support us as volunteers. I am so grateful that I was able to be a part of such an amazing event and support such a worthwhile cause.