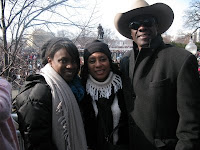 Jo-An Turman's Experience in Washington DC continues...
The entire experience was surreal. Meeting people from all over the world with the same, if not more excitement, hope and optimism then us because of our new President and administration was a site to see. Being there amongst the crowd when President Obama and Vice President Biden took their oaths was more emotional than I expected. Witnessing history after studying the Civil Rights movement and being involved in events over the years made this occasion especially personal.

My family was very fortunate, we attended several events including the “Obama That One” awards at the Newseum; the 2nd Annual “Realizing the Dream” awards ceremony hosted by Martin Luther King III; the opening “We are One” inaugural concert at the Lincoln Memorial; the inauguration at the Capitol; the Service Nation presented by The Artist and Athletes Alliance Reception; The Witness to History reception presented by NABJ (National Association of Black Journalist, in which our daughter is the President for Northwestern University and Regional President of the Midwest) with NY Governor Patterson and author Gwen Ifill; A Salute to Change dinner presented by the National Black Chamber of Commerce and National Newspaper Publishers Association Foundation at the French Embassy in Georgetown and a couple of balls (Congressman Cummings “Celebration & Commemoration of this Moment Ball”; the “We the People” ball at the Capitol Hyatt and the SCLC ball at L’Enfant Plaza) we had a full four days of President Obama inaugural celebrations. 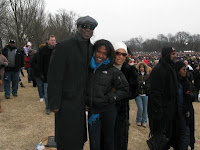 We were so glad that Vice President Biden and his wife, Dr. Jill volunteered at Habitat for Humanity on the National Day of Service. We toured the Smithsonian’s African American Art Museum’s Civil Rights exhibit. Glynn was called up to say a few words at most of the events unexpectedly when they found out he was in attendance. It was all worth it, the overpriced DC hotel (prime location though), the overpriced airfare, Glynn having to pose for a million pictures and us having to walk in the cold to get around. In the end we have a priceless memory that was shared by my family, we truly witnessed history and attended a once in a lifetime event.
- A. Jo-An Turman, M.A. Senior Director of Communications & Marketing