Volunteers Give it Their All at Paid Dues Habitat Build Day

Last Saturday I was lucky enough to join the Paid Dues Habitat for Humanity Project Build 2011!  What is that you might ask (I did too!)?  This was a special build day driven by rapper, Guerilla Union member and Paid Dues creator, Murs.  Murs built with Habitat for Humanity of Greater Los Angeles back in 2007 on the Jimmy Carter Work Project and has been a supporter ever since.  He had the idea to put together a build day where 25 of his fans could register to build alongside him!  I had never met Murs until Saturday and after just an hour you could see what a gracious, hardworking and fun guy he is!  Not to mention his wife Kate, who is just as lovely. They showed up bright and early – 8 am - and ready to work!   As a group we hit what would be considered the “jackpot” of construction projects – we were going to build and raise the first walls of the 3-unit development!  It truly is an exciting day in the construction process to be a part of.  As an employee, this was my first opportunity to see a wall raising so it was extra special.

Being a new project, this was the first day there was a group on site.  As I arrived at 7 am, I was excited to meet the fans who had signed up to build with Murs – I would come to learn that 2 people had driven overnight from San Francisco to be a part of the project! It was such a cool group of people.  Our first volunteer, Chris, showed up extra early and made the mistake of telling us that he had “some experience in the building industry”.  We cut him off before he could say industry and sent him to our site supervisor – Billy – to get to work.  Although we can teach anyone and everyone the tools you need to complete the projects on site, a skilled volunteer is always exciting. Poor Chris - I think by lunch time he had become an honorary crew leader!   As the others arrived and broke off into groups, we were all taught how to hammer a nail into the 2x4’s in preparation for putting together the first wall.  I know, you are thinking, “Seriously? Hammer. Nail. Hand/Eye Coordination. Easy enough.”

Come out and build with us sometime and you will learn that it isn’t as easy as you may think, but you will learn how to CORRECTLY and efficiently hammer a nail – courtesy of site supervisor extraordinaire, Billy Gifford- I promise.  To top it all off, one of the new partner homeowners of the site, Duetrell, showed up to help build her new home.   The group was so excited to meet one of the homeowners they would be raising these walls for and to have her working alongside them all day was a gift. 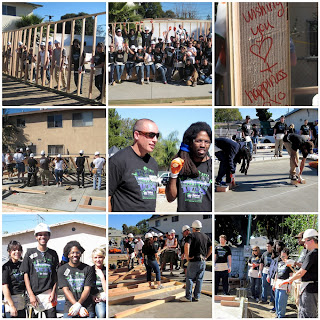 It was so much fun to see the group go from cautiously intimidated by the idea of building a wall to raising the wall they had built - and all before lunch time!  The energy of the fans and the Paid Dues group was so positive and I am so glad I was able to share the experience with them.


Paid Dues/Habitat For Humanity Project from Wonderbox Studios on Vimeo.<

If you have wanted to come out and build with Habitat for Humanity but think you don’t have the construction skills needed to volunteer, think again!!  We need your help and you will be surprised by how much you learn in an afternoon, not to mention the fun you will have being a part of the team effort.  Every build experience - whether you’re raising walls, painting, digging trenches or installing countertops - is an experience worth having.

Have you volunteered with Habitat before? Tell us about your experience. Did you learn any new skills? Did you enjoy yourself? We really enjoy hearing about other volunteers experiences.