Hanging with the Kardashians at the Teen Choice Awards: Giving Back has its Perks! 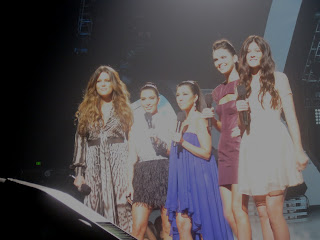 Yes, we were this close to the Kardashian Klan at the Teen Choice Awards!!

As I walked into the Polo Lounge at the Beverly Hills Hotel to meet Tom and June Simpson, winners (with a bid of $3200) of a lunch with Golden Globe nominated actress, Emmy Rossum (Shameless), my normal Saturday afternoon transformed into something out of a movie. Sitting there with all three was one of the most pleasantly surprising experiences, as I enjoyed lunch with some of the most down to earth people I’d ever met. Tom had the best quote of the afternoon as we were talking about what they decided to do with their money after they sold their company, “Our main goal was to donate to charity but then we found out about CharityBuzz and realized that we could not only give back but have fun doing so.” That statement seemed to encapsulate my entire weekend, as my Sunday continued the Hollywood experience when I attended the 2011 Teen Choice Awards. Now, I have to admit, I came from the world of FOX, so this wasn’t my first time at the rodeo for these awards (I’d actually been there 11 times before) but this time I was able to attend as a guest and had the added honor of personally handing over the experience to Ashley Friedland, the generous winner (with a bid of $2350) of the exclusive Teen Choice experience that included tickets to the show along with two of the hottest after party tickets in town. As I sat there in the front row with my nephew, seeing the likes of Justin Bieber, David Beckham and Fergie pass by and say hello, it hit me that Tom was right. Your generosity can have perks. Now those perks aren’t always Hollywood experiences, some may be making an amazing new friend, learning a new skill or even conquering a fear, but in all those instances, you receive a reward for being responsible with the blessings you’ve been bestowed. My question is; what are you doing with what you’re given? Not just your money but your time and skills; we all have talents that can be blessings to others, so take a moment and see how you can give back…believe me, you won’t regret it!
-blog by Yvonne Lara, Marketing Manager, HFH GLA